There was a table for four with one empty seat when Sandy walked into the Rightsizing Marketing Event at Springmoor. She was in the early stages of her search for a new home in Raleigh. Marilyn was seated at the table and invited Sandy to join them in the empty chair. The introductions were made and the two became fast friends during the meeting. 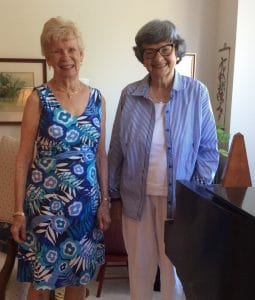 Sandy’s son and his family live in Raleigh. She has two daughters – one lives in Michigan and the other in Colorado. Being close to her family was her top priority. Raleigh’s climate as well as the lifestyle options offered the most for her. Leaving her home in Maryland where she and her husband had lived for twenty-five years was going to require some rightsizing tips. Although an expert on moving as a military family, she knew Raleigh was going to be her retirement city.

Marilyn also has a son in Raleigh. She too came because he and his family were here. Her daughter, like Sandy’s, lives in Colorado. The similarities between the two began in their first conversations about family. Marilyn had made the move to Raleigh from California where she and her husband had lived for forty years. She too had been part of the military family. Both Sandy and Marilyn discovered early on that their husbands both served in the United States Navy. 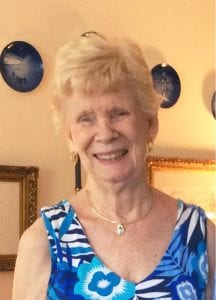 Sandy, originally from Kansas, came to Raleigh from Maryland

After the event was over, the two promised to stay in touch. Sandy left for Maryland while Marilyn drove back to her townhome in North Raleigh. They began with emails, then phone calls, texts and even visits when Sandy came back to Raleigh for a family visit. The two added their names to the Waiting List at Springmoor within a few months of each other. Both ladies requested the same size apartments and the same locations on campus. 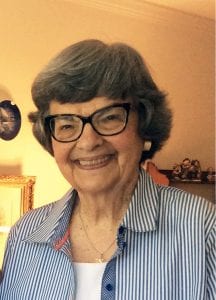 Marilyn, originally from Illinois, came to Raleigh from California

Marilyn got the first phone call from Marketing that an apartment was available. She and her daughter came to choose paint colors, cabinets and flooring in the fall of 2017 and she moved to her new home in late December. Sandy patiently waited for her call and was thrilled when she was told this spring that there was another apartment available in South Village.
The two talked often to compare notes and offer advice on downsizing, packing and moving. Sandy’s daughter-in-law came with her to measure and help place the furniture. And, yes, BOTH of the new residents have pianos that needed a special place in their new apartments. The paint colors they chose are similar. They both find their pianos offer a place to relax. Marilyn uses headphones on her keyboard so she can play at all hours of the day and evening. Sandy’s baby grand is nestled into her bay window and she has found that, while sitting on the piano bench nestled amongst the view of the third floor, she is up in the trees like the birds. 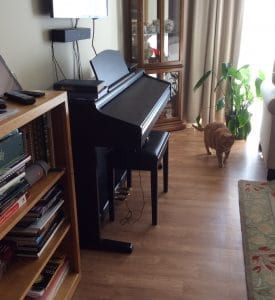 The other residents were excited to know that Sandy was moving in this summer. They had all heard the story from Marilyn about how they met. She has been able to show Sandy around Raleigh, introduce her to her favorite restaurants and stores. They have begun to find their way around Springmoor and involve themselves in array of activities. Sandy has always been a swimmer. She is enjoying the Aqua Fit class three mornings a week as well as a Balance Class in the afternoons. Marilyn has never been a swimmer but, after Sandy’s encouragement, she has joined the class and was pleasantly surprised at how much better she feels.
The two have also been active volunteers in their communities prior to their move. Sandy worked with a summer camp for dyslexic children in Baltimore, Maryland, while Marilyn was involved in a church ministry for the hearing impaired in Long Beach, California. She is proficient in sign language. The two are now looking for places to continue their volunteer activities in Wake County. They discovered through conversation that they even had the same pastor – once while Dr. Ogilvie was living on the east coast in Pennsylvania and later while he was serving at a church in California. The conversations continue as they keep finding their similarities! 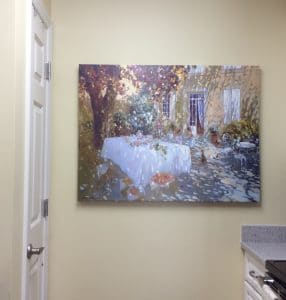 Many of their grandchildren are now close by. Marilyn has four granddaughters and she says the greatest sound is the ding on the phone when a text from one of them comes through. “Knowing they are thinking about me is such a gift. Staying in touch even if it’s just a quick photo or a short sentence is wonderful,” says Marilyn with a big smile. Sandy has seven grandchildren, two of whom live here and she can share in their school activities quite often.

These two Midwesterners, Sandy from Kansas and Marilyn from Illinois, are now neighbors at Springmoor. Their families have brought them to Raleigh. A Springmoor Rightsizing event introduced them and now they shop together, eat together, share great books, enjoy their pianos and are finding ways to share their talents with the community in their new city.
We would love to show you our campus, introduce you to our residents and help you find ways to get involved in the community. Give us a call at 911-234-7626 to schedule a tour.