A New Address with Familiar Traditions

The two are active in the Raleigh community. One is an employee and the other a volunteer. New Springmoor residents, David and Pat Waters, have continued their busy lifestyles since their recent move to the community adding even more to their lengthy to-do list. 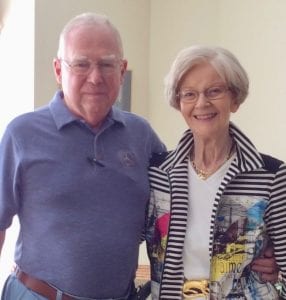 Pat says the move was probably the hardest on their grandchildren. After living in their house for forty-six years, the children didn’t want to disturb the traditions and the furnishings they had grown up with. Grammy Camp was as much fun for her as it was for all of them. She laughs when she says, “They insisted we bring the dollhouse.” And asked how old the grandchildren are now, she smiles and says, “They are 17 to 23 years old!” Family gatherings at the dining room table all involved playtime in the dollhouse when the little ones were finished eating. The conversation was lively and the dinner was expertly prepared in Pat’s kitchen. She cooked for years in a smaller stove than the one she has in their new two-bedroom apartment.

The Waters met when they were college students at THE Ohio State University. (With a chuckle, David puts great emphasis on THE.) She was from the big city of Columbus and he was from a small northeastern Ohio town. After college, the two were married and moved to Pittsburg. Nine years later, CP&L (Duke Energy) brought them to Raleigh. David is still with Duke Energy. At six each morning, he heads downtown, four days every week. Pat still makes his lunch. 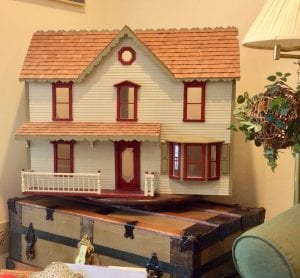 The dollhouse is tucked away in a corner for the grandchildren

The two began to think about retirement and downsizing more than three years ago. “Being married to an engineer, “ Pat says, “we plan and organize.” Packing was done meticulously. The two were quick to say that starting early, while they were healthy and active, made the move so much easier. They visited Springmoor and knew almost immediately it felt like home. The community is nestled into a neighborhood. It is convenient to shopping, restaurants and their families. The tall trees, walking paths, gardens and natural areas made it feel like their own neighborhood. No large parking lots and busy traffic make it very peaceful and an easy decision to make for their new home. David was thrilled to discover that he could still tend to his hellebore garden at Springmoor. 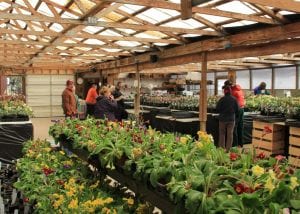 Before the first piece of furniture was even delivered, he contacted Thom Morgan, our Landscape Director, and chose a spot in the Residents’ Garden. The hellebores were replanted from their Raleigh home to the new garden in late winter. More of his plants have arrived since they have moved in. And now they have all bloomed! David has been a customer of the Pine Knot Farms hellebores for years. The farm is located just over the North Carolina–Virginia line near Kerr Lake. At one time, he was tending to three or four hundred of these beautiful flowering plants in his yard. Now it’s a short walk up to the garden before or after work. He has met a great group of fellow gardeners to trade tips with as they gather in their vegetable and flower gardens. 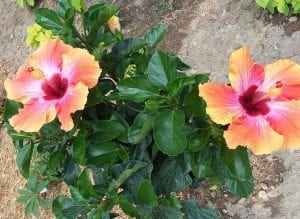 Pat helps in the garden occasionally pulling weeds, but she much prefers to be inside with her creative paper projects or preparing a lesson plan. She teaches a weekly bible study program to a small group of 120. She says small as the one she previously taught had 450 women. Her favorite spot to prepare her lessons is in her new home office surrounded by the wooded view. She can see the tops of the trees and the colorful shrubs when she is sitting at her desk or nestled on her comfortable living room couch. She has jumped into a few volunteer positions at Springmoor since her arrival too. And, of course, she loves the Wellness Center’s aerobics and balance classes located just a floor below. Coffee time with her neighbors is a must every morning.

What do they miss most about their former home? Their neighbors are at the top of list, but Pat says Springmoor is such a “welcoming” group. The two have met new friends and reconnected with many of their Raleigh friends who live here also. They can choose to dine with their old friends, meet someone new or dine alone. The two like to mix it up each night.
What is better than they expected? Quickly, they both say, “The friendliness of the residents and the new apartment.” Living on one floor is so much better. Their senior move specialists, Carolina Relocation and Transitions Services, helped them downsize. They took their time as they began to pare down all of their stuff. They don’t feel crowded and have found that simplified living is much better than they could have imagined. David has jumped into volunteering too. He has started a group on Wednesday nights in the movie theatre. They are sharing their WWII DVD collections. The conversation between veterans has been inspiring for all of them. Along with Leah Willis, our Resident Life Director, he has also planned a new series of speakers for a Friday afternoon bible study group. 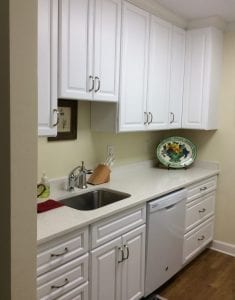 Kitchen traditions will continue in David and Pat’s new address

Nothing much has changed except their address. Asked if they would begin new traditions at Thanksgiving and Christmas, Pat quickly said she plans to host their family of ten at their dining room table in their new space. With a larger stove, it should be much easier! She will cook all of their favorites and the dollhouse can be found in the corner of the living room if anyone still wants to play.
Would you like to see the campus? The garden, the floor plan options, the volunteer opportunities, the Wellness Center and so much more can be part of your tour. Call us at 919-234-7626 to schedule a visit soon.