Why Did You Choose Springmoor? 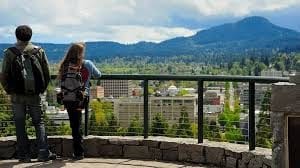 University of Oregon. A view from Skinner Butte

With a smile and a laugh, Michael and Ellen Rogers say this same question gets asked often. Why did you choose Springmoor? What put it at the top of the list? Residents of Eugene, Oregon, the two were here this week to make their interior selections for their new home. Ellen joins Michael in her retirement in a few short months and the two are moving across the country to enjoy all that Raleigh has to offer. 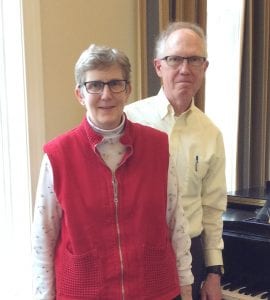 Ellen and Michael Rogers will soon be residents at Springmoor

Starting with a Google search for the best place to retire, access to the best health care, availability of university libraries and activities, airports, climate and an uncongested metropolitan area brought Raleigh to the top of the list on almost every search. The two were very familiar with Continuing Care Retirement Communities (CCRC) and knew this was the first step in finding a place to retire.
Ellen’s grandparents, parents and extended family have all lived in CCRCs so they put this at the top of their search criteria. They were both amazed at the number of possibilities in our area. Most cities, they said, only had one community to consider and many cities had nothing at all to offer. Michael continued his research and picked five CCRCs in the Triangle area to visit. 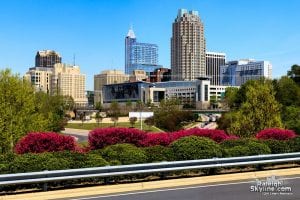 A view of downtown Raleigh

US News & World Report ranks Raleigh and Durham on their list as the #7 Best Place to Live. Known for our research and technology roots along with the collegiate rivalries, the area offers a high quality of life. At the top of their list was access to university libraries and activities. They have both had careers in academia and wanted to continue this similar lifestyle. Universities typically attract well-known lecturers, musical performances and continuing education. An ability to access libraries for research, scholarly magazines and journals was an important factor for Michael. He was happy to also find the Triangle on the most educated city list.

Next on their list was access to the best health care programs. With Duke University Medical Center and UNC Health Care System as part of the triangle, they knew this area was exceptional for research and health care. The most updated medical facilities would be located within minutes of their relocation if Raleigh were chosen as their new home. 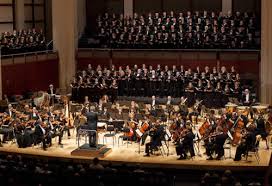 A small town feel with big city offerings was important to both Ellen and Michael. Having lived in San Diego, California; College Park, Maryland; Tucson, Arizona and East Lansing, Michigan, they both wanted all that big cities have to offer but without the headaches of traffic and congestion. Speciality shops, concert series, restaurants, sporting events and big city things to do can all be found in Raleigh, Durham and Chapel Hill. They loved the fact that the three cities are spread out keeping traffic to minimum but still offering so many options for its residents. A quick drive from one to the other usually takes no more than thirty to forty-five minutes. RDU’s International Airport also offers easy access for their friends from across the country to come for a visit. They don’t expect to travel much but do plan on entertaining many friends in their new home.

The average high temperature in Raleigh is 71° and the average low is 50°. Residents are quick to say that we are in an area of the country that has all four seasons. Sometimes even in the same week! Leaving Oregon and the cool temperatures to come to the East Coast was very enticing. 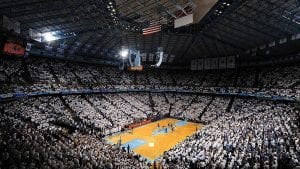 UNC Basketball in the Dean Dome

Having lived in many college towns, the two knew that sports brought out an exciting rivalry and camaraderie not found in all towns. We not only have one team to cheer for but we have THREE! And we are not only a UNC, Duke, and NC State basketball triangle but college football and baseball fill up the weekend tailgating schedules too. Besides college teams, we also offer two minor league baseball teams, a professional ice hockey team and professional men’s and women’s soccer teams. We look forward to asking the Rogers which team they have chosen to cheer for after living at Springmoor during a basketball season. 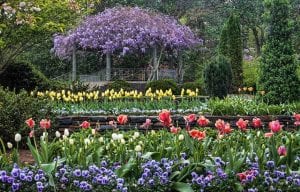 Michael has two daughters and their families living in California. One has begun their search for the empty-nest life style. After his granddaughter leaves for college, the family plans to downsize. Putting in different criteria, Michael’s daughter also found Raleigh at the top of her list. Ellen’s brother did his research and moved here only two years ago. They all put in different information and independently came up with the same results! 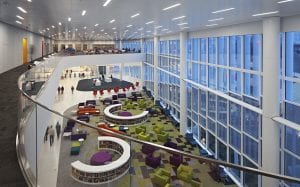 What was it that made Springmoor the top choice? Michael came by himself two years ago to tour the area. Ellen was working full-time and knew that they had easily agreed on homes with their other moves. When he pulled into the entrance, he was amazed at the landscaping and the hidden oasis he had found. There were no tall apartment-style buildings surrounded by parking lots. The residential neighborhood setting quickly won him over. He spent two afternoons walking around the Springmoor campus. He randomly ran into five different people and each of them shared their own story with him. They all were eager to tell him about the joy they continue to feel with their Springmoor choice for retirement. He said “the vibe” he felt from these residents sealed the deal.
Springmoor will be Ellen and Michael Rogers’ new home in June. We look forward to having them here. If you would like to know more about the Triangle and Springmoor, we invite you to call 919-234-7626 and schedule a tour soon.