A Storyteller, Teacher and Writer 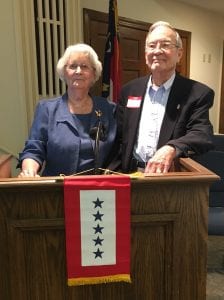 Julia and Earl McCullers, a Storyteller and a Veteran

Julia McCullers grew up in a family where storytelling was a valued tradition. As a child during World War II, she observed how profoundly everyone was affected when her grandparents’ five sons and two sons-in-law were whisked away to serve in the armed forces around the world. As a mature woman she wrote about those difficult war years in a memoir she called “News from the Homefront.”
After Julia’s Veterans Day reading of that story here at Springmoor, the buzz in the hallways reflected awe and admiration for her skill as a storyteller: 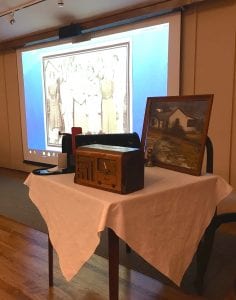 She sets the stage both literally and figuratively. Surrounded with memorabilia behind her on the stage, she paints such beautiful pictures with her words. With the old radio, the photos and flags encircling her, the stories she tells will bring you to tears. – Peg Bedini, Springmoor Resident Association President
That event was not the first time Julia had captured a Springmoor audience with a story based on personal history. A year ago, in a presentation called “Almost Armageddon,” she told of her experiences as a young Navy wife who was living on the U.S. Naval Base at Guantanamo Bay during the tense days of the Cuban Missile Crisis. She and other wives and children were swiftly evacuated from the base on very short notice, forced to leave behind their husbands and their homes and to face a world where nuclear war seemed imminent.
Julia McCullers lived these stories; they make history come alive. 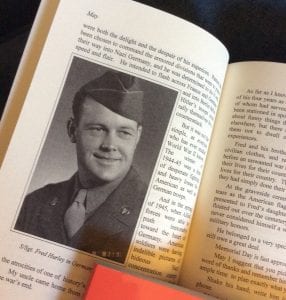 One of Julia’s uncles featured in her memoir, News from the Homefront

Julia is also a teacher. She and her three daughters, as the family of Earl McCullers, whose career in the Navy spanned 28 years, were transferred from coast to coast and from one duty station to another. As they moved around, she continued her passion for words by teaching English in situations that included a North Georgia high school, a girls’ private prep school, an overseas school for military dependents, two community colleges and three universities. Looking back over her long career, she says that her beloved high school English teacher, Mrs. A. G. Glenn, probably inspired her to become an educator. She and Earl, who were high school classmates, both give Mrs. Glenn credit for their love of the written word. 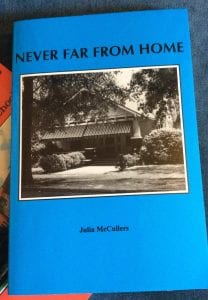 Never Far From Home, a collection of columns from the Smithfield Herald

For many years, Julia wrote a column for the Smithfield Herald. A collection of these columns, titled Never Far From Home, was published in 1998. In 2005, she and fellow Smithfield High School alumna, Ann Huckenbeck (a retired vice president of the University of Connecticut), realized that the history of their old school was in danger of being lost. The building, more than a century old, was to undergo drastic changes that threatened to erase any evidence of a proud school that had educated many successful North Carolinians. After a hyper-active Alumni Association formed, the members lobbied the Johnston County Board of Education to rename the building in honor of Principal A. G. Glenn, who had shaped many lives during his long tenure. At their urging, space was set aside for a small museum, and, over a period of three years of intense effort, memorabilia and displays turned the revamped building into a site that now handsomely houses the Johnston County Board of Education and hosts special events and meetings. Julia realized that she had enough material to write a book about the old school, and it was published in 2007. A History of Smithfield, NC High School 1903-1969: A small town, a good school, was sold to underwrite a dedication ceremony for the A. G. Glenn Building – a 2008 event that attracted more than 650 alumni and friends. 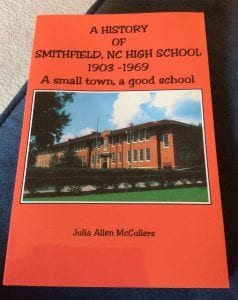 A History of Smithfiled, NC High School written for the dedication of the A.G. Glenn Building

Here at Springmoor, Julia is putting the final touches on another book. And she is enjoying writing with the Springmoor Writer’s Group facilitated by Dr. James Clark, NC State’s English Professor Emeritus. The group gathers monthly to read their latest stories. Some write about family history and add a new chapter each time, while others write about a recent event. She loves the opportunity to laugh and listen with her fellow writers.

If you haven’t met Julia yet, you will certainly want to watch for her next speaking engagement on the events calendar. Be sure to ask her what she is reading too. An avid fan of the library, she can always recommend another great read. Thank You for Being Late by Thomas L. Friedman has her attention for the moment. It deals with the increasing rapidity of change in our world and with human inability to adapt at the same pace. She readily admits that she often seeks the advice of her six grandchildren – especially regarding technology. She laughs when she thinks of how unlikely it is that her own grandparents would have asked her for advice on how to manage their slow-to-change farm.
Julia and Earl McCullers moved to Springmoor a year and a half ago. Doris Litchfield, her sister, moved here a year earlier. We are lucky they are writing down their stories for the next generation. And we know that hearing one of these well-told stories from the storyteller, teacher and writer will continue to be a special treat for everyone at Springmoor.