Full Circle – From the Grocery Store to the Convenience Store 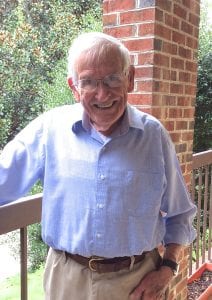 Albert Calloway, a Springmoor resident and board member

Since its beginning in 1984, a dedicated Board of Directors has managed the Springmoor Retirement Living Community. With a wide variety of professional backgrounds, they each bring a different perspective to the table. They meet quarterly to discuss all aspects of Springmoor’s activities, including but not limited to finances, health care, food service, maintenance, future plans, and trends in the Retirement Living Industry. In the next few months, we will introduce you to each of these experienced leaders. 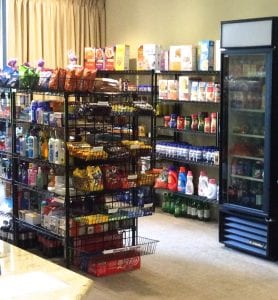 Albert Calloway is not only a board member but also a resident at Springmoor. He shares his story with us this week. He laughs when he says, “I have come full circle now.” When he was nine years old, he began working in his father’s grocery store in Concord, NC. His main job was to sweep the floors. At fourteen, he said his father offered to pay him for working that week. On this very first payday, he earned a dollar. And yes, he has it framed and hanging in his office today.

Albert graduated from Carolina and entered the life insurance business. Shortly afterwards, he was drafted into the army. During the Korean War, he was fortunate to serve in Germany. Following his service he returned to Concord and bought his father’s grocery store. He then purchased another one. With two partners, he opened a third store. After the sale of the stores, he made a move to Raleigh with his wife, Lorine, and their young daughter. Here he began his thirty-year career with the State of North Carolina Economic Development Program.
Albert has served on the Board of Directors of a wholesale grocery company, a plastics manufacturing company, and on the original Board of Directors of The Council for Entrepreneurial Development. In 1994, Albert was invited to join the Board of Directors of the Springmoor Endowment Fund and now serves as president of the fund. This fund was established for the benefit of the residents. Six years later, he was invited to become a member of the Springmoor Inc. Board of Directors. 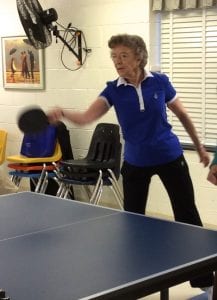 The Calloways continue to be very active in church and community activities. When both of their mothers experienced serious health issues and had to move to nursing homes, no one was pleased with the situation. “We wanted something better for our golden years and pledged they would not be a burden our children.” They have been friends with the Springmoor developers for many years and followed the development of this community as well as other continuing care communities in the area. “There is no doubt in our minds that we made the correct decision to move to Springmoor,” says Albert. “Being here is a gift to our children. They have busy lifestyles and they know we are well cared for.” Both are quick to say, “Come early, come when you can be active and enjoy all that there is to offer!”
The two moved into the only apartment that was available in 2010. They thought they would move again to something larger or to another location but quickly found that they have everything they need right where they landed. “We have been lucky in so many ways,” Albert says. They participate daily in the exercise classes and think the staff at the Wellness Center is terrific. “All of instructors are motivational, upbeat, happy and encouraging. You couldn’t ask for anything better!” 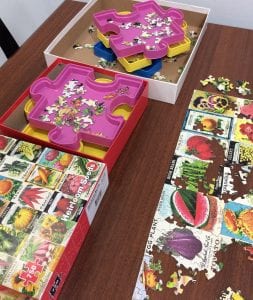 The puzzle table is one of Lorine’s favorite places

The two continue to travel to the beach and the mountains, entertain friends, volunteer in the community and enjoy everything that Springmoor has to offer. Their family has grown to include a second daughter, a son, and four beautiful grandchildren. Albert and Lorine both say, “We can never see enough of them!”
Lorine loves her puzzle table in the common area outside of their apartment. She says, “There is always someone fun to talk to while I’m working on a puzzle.” She plays Ping-Pong three or four days a week. This active group is quite passionate about their sport. Lorine has served on the Decorating, Library, Food, and Wellness Committees since their move to Springmoor. She loves to bake but leaves most of the cooking to the Springmoor dining staff. “It’s one of the many great features of living here.” 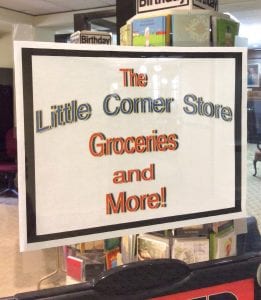 Full Circle – from The Grocery Store to the Convenience Store

Albert serves on the Archives Committee, the Endowment Committee, and has been a member of the Management Advisory Committee and the Health Committee. He now works once a month in the Convenience Store. “Full circle,” he says, “I started sweeping floors in the grocery store before I was a teenager.” With a laugh, he says, “And now, I work the cash register in the Springmoor Convenience Store.”
The Springmoor Board of Directors feels like they are the lucky ones to have such a dedicated member as Albert Calloway.