From the East Campus to the North Village

They met when they were 18 years old. Margie came to Duke from Richmond and Peg came from Raleigh. Both girls were an only child and encouraged to go to Duke by their fathers. Both earned academic scholarships to pursue their degrees. 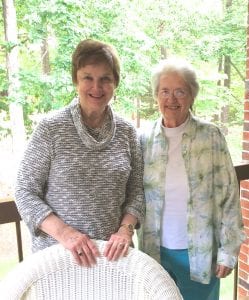 Together again – Peg and Margie

The Girl from North Carolina

Peg grew up in Raleigh, a Hugh Morson High School graduate and daughter of a Duke graduate. Her dad often said, “There’s no way I am letting you go to Chapel Hill.” So she packed her bags and left for Durham. She moved into Aycock Dorm on the East Campus, the Duke Women’s College side of campus.

The Girl from Virginia

Margie grew up in Richmond, Virginia. Her father loved Duke football and thought this would be a great place for his daughter. With her scholarship, she too headed for Durham and moved into Aycock (now East Residence Hall). And the adventure began for Margie and her new friends. 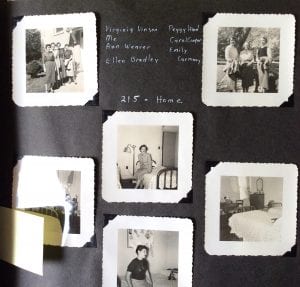 The girl’s rooms were on the same corner of the hall. Eight girls were paired with an upperclassman and each was given a large white hair bow to wear for six weeks. The bow was to be worn at all times to help designate the new freshman class. Both Margie and Peg wrinkled their noses with the memory of this initiation period at Duke. Margie recently found the bow and many other keepsakes in her scrapbook at her daughter’s house. The two girls and their roommates remained in the same dorm for the next three and half years. 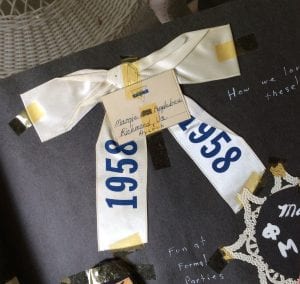 Margie majored in Accounting while Peg chose English. Most girls stayed on the East Campus with their classes but Margie was often on the West Campus with her accounting, finance and statistics classes. She also spent lots of her time working in the library. She said she actually spent more time reading than working. Shelving the books often stirred her curiosity and she found herself reading a chapter or two of each new book. Peg described Margie as “very, very smart.” With a smile, Margie thanked her for the compliment and said her Duke days kept her nose in the books. Her scholarship was tied to her academics so grades were very important. Not to say that they both didn’t have fun while they were there too! 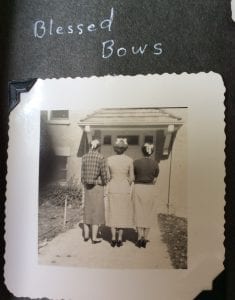 The girls with their “Blessed Bows”

The football program was important to Margie’s dad. Yes, it was football they both said, that was the big sporting event at Duke in 1954. If you wanted to go to a Duke basketball game, you simply headed over to Cameron and walked right in. No tents, no camping out, and no tickets. Asked if they ever pulled any pranks, one of them giggled and told her story. She said her 2nd floor room was directly above the front door. Late at night, when a couple came back to the dorm and the boy turned to the girl for a goodnight kiss, they sprinkled water on them from the window above. 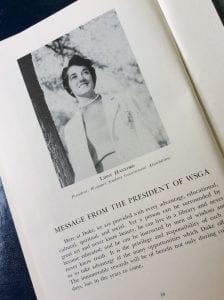 Fast forward, sixty plus years and the two are together again. They both graduated from Duke, got married and moved to new states. Both moved multiple times across the eastern United States, had children and pursued their careers. The two lost touch after they left the East Campus.
That is until the day that Peg saw Margie Ford’s name on the Springmoor move-in report. As she recalls, “the name sounded very familiar. I remembered a girl name Margie dating a boy named Tom Ford.” With a little digging, she put it all together and realized Margie was in her small Duke FAC group (Freshman Advisory Council).
The two both went on to pursue Master’s Degrees. After a few years of teaching English in Rye, NY, Peg received another scholarship to pursue a Master’s degree in Guidance Counseling. Margie, for her 65th birthday, completed her Master’s Degree in Pastoral Care. Peg was the President of Aycock Dorm and now is the President of the Springmoor Residents’ Association. Margie, a Phi Beta Kappa graduate continues to pursue her educational interest.
With their fathers’ encouragement, the girls moved to Durham. With their children’s encouragement they moved to Springmoor. The two now live on the same wing, separated only by a floor. The two Duke grads have come full circle and are back together again. 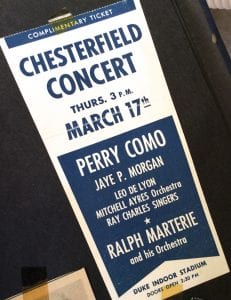 The Adventures! The Memories!

Asked what is the best memory from Duke both girls say the “adventure” of being away from home was the highlight of their college days. Yes, they are both avid fans and even with grandchildren at the other ACC schools, they would never, “not in this lifetime” ever cheer for anyone but their Blue Devils.
Asked what is the best thing about Springmoor, they both will tell you “it’s the people.” They are warm and welcoming. They are friendly. And there is “no more cooking!” The two have enjoyed going through Margie’s college yearbooks and scrapbooks, remembering old friends and catching up on the last sixty years. They are both very involved at Springmoor. Volunteering, leadership and counseling activities are where you will find these two on their new campus. Let the next adventure begin!